SEH stands for Structured Exception Handling developed by Borland and that gave license to Microsoft. This is the reason why SEH is available in Windows only. Exception is an error that disrupts the program execution. SEH is a software method of dispatching and handling exception, for software as well as hardware. If any exception occur then it first goes to OS that checks if any suitable handler is present/ define or not. If user define handler for that exception is present then OS pass exception to that handler otherwise pass to default OS handler.

Syntax for try, catch block is ::

// the block of code to try

// the code to run in the event of an exception

The information about SEH is stored in Exception Registration Record. Exception Registration Record is the first record in the TIB(Thread Information Block). We can see TIB in the main thread of the process. Exception registration is the linked list that can be assess by FS [0] register. ERR has 8 bytes that point to two variables one is the pointer to next ERR and another variable is the pointer to handler. Registration of exceptional handler happen at run time (for proof we use Immunity debugger explained later) and depends upon where we are in the program. The linked list may be grows when program proceed. All records store on the stack and when new record add up using LIFO fashion. If new records added then OS handler is at the last and stack may shrink dynamically when handler remove from the list.

The prototype of exceptional handler is defined in except.h in win32. As I mentioned in ERR, there are two variables, the second variable that is pointer to the handler(or SEH handler)has two main components

User defined call back function takes four parameters that can be seen in figure 1. This function tells what to do when exception occur. Some focus on important parameters –

The Exception Record structure can be seen in figure 1, 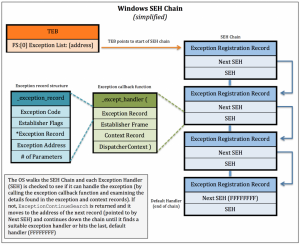 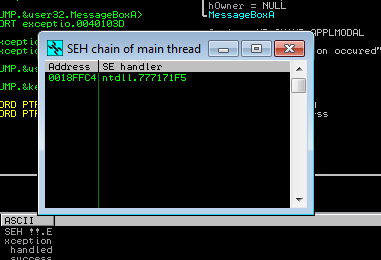 You can see that only one exceptional handler is at this state when program proceed our handler will added and will appear on the SEH chain. 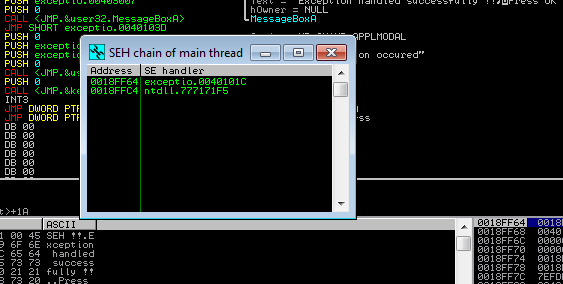 Now our exception handler added in the link list of ERR(Exception registration Record).

Now time to Handel the Exception!!

As I explained earlier ERR can be access by using FS register. If you want to see then write d FS:[0].

The memory access violation is successfully handled by our handler and it prints the message. After handling the exception this will remove from the SEH list and FS:[0] point again to the OS default handler.

ASSUME fs:NOTHING   ;if we want to use fs set nothing

;This code will get executed if an exception occurs.

I remember my first meeting with Nagareshwar in 2011. We were sitting in a small cafe with a cup of coffee. we discussed many things but one of the topic was how to build a group of like minded people to solve some real problems with education system, economic system or just to create an […]

One App to Recover All Your Passwords